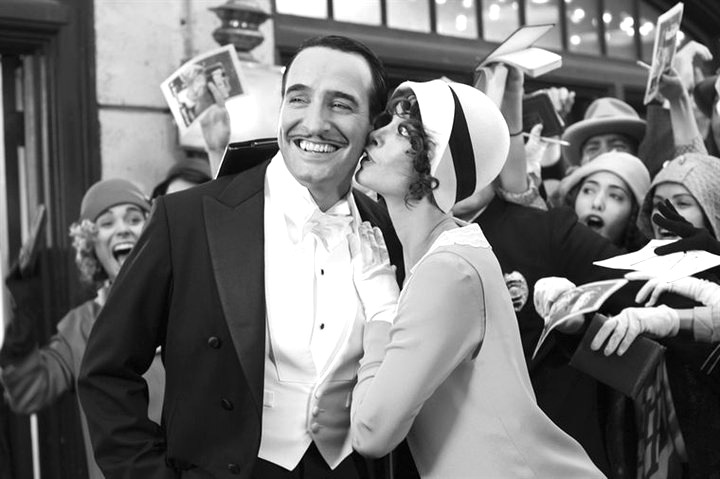 Most of the people I know refuse to watch a film without sound and/or without color. Most of them assume they would hate the film unless it is from our century. This is not a judgement, it’s more like an observation. But I do judge the prejudice, a bit.

So I wonder, would they still refuse to see a black and white silent film if it is from our decade? If it won Best Picture at the Oscars? Plus, it stars the cutest dog which deserves another award. He gives reactions; covers his eyes when embarrassed, mock falls when hears “bang!” and all. The cutest.

The Artist is Michel Hazanavicius’ love letter to Hollywood’s silent era. The film follows a silent era film star George Valentin (Jean Dujardin), whose career is on the verge of collapsing after the advent of sound. The new era in Hollywood cinema opens the door for a new star Peppy Miller (Bérénice Bejo) to shine.

They say that cinema is an art where the craft is in showing and not telling. The aesthetics provide the perfect environment for the director to practice “show, not tell” in the most skilful way. For instance, the scene where Peppy wears George’s jacket to cuddle herself is one of the most heart melting scenes I’ve seen that express love.

It is so skilful that we don’t even need that many inter titles at all. The titles are used less to orient the viewer in the story, but more to tell jokes. The ones that I remember are when “My father is a big fan” becomes the biggest insult; and “Congratulations you’ve got nothing left!” is supposed to be good news.

Thematically, the film reminded me of A Star is Born. Similarly, the story begins as the male character is a successful artist until his decisions bring an end to his career while the female character becomes a star. In the beginning, George draws a beauty mark on Peppy’s cheek, telling that she needs to have something different from the others to be seen in Hollywood. Ironically enough, his signature on her face gives the name to her big film: Beauty Spot.

George’s dream sequence is brilliant. It is as if we weren’t the ones not hearing but he was living in a silent world. As the world around him gains sound, he loses his voice. The whole film is told in a gist within a short sequence.

Hazanavicius definitely knew what he was doing. The filmmaker uses the best methods from classical Hollywood without being old fashioned. The oblique Dutch angles when Geroge goes mad, the Shakespearean style of play within a play… My favorite one is his inspiration of the dinner scenes in Citizen Kane. In that film, Orson Welles edits a married couple’s dinner scenes together to show how the dynamics change for the worse in years.

In The Artist, there is the sequence of credits of films in which Peppy takes roles. We get to understand how she has risen in her career as we see her name written bigger and bigger until she becomes the main lead. Similarly, the moment they fall in love with George is captured in the repetitive shots when they fail to shoot the dance scene without being distracted or laughing. Suddenly they turn serious and are in love.

The black and white aesthetics from the silent era work proficiently as it goes hand in hand with the story and the characters. Notice when they are together, he is mostly silent and she is the one continuously talking. Adopting the aesthetics of the silent era adds to the story, making it even richer. Besides, it is not silent thanks to the continuous orchestral score by Ludovic Bource. I cannot put my finger to which aspect of the film I loved the most, but it could be Jean Dujardin’s handsomeness, radiant toothy smile, and moustache.