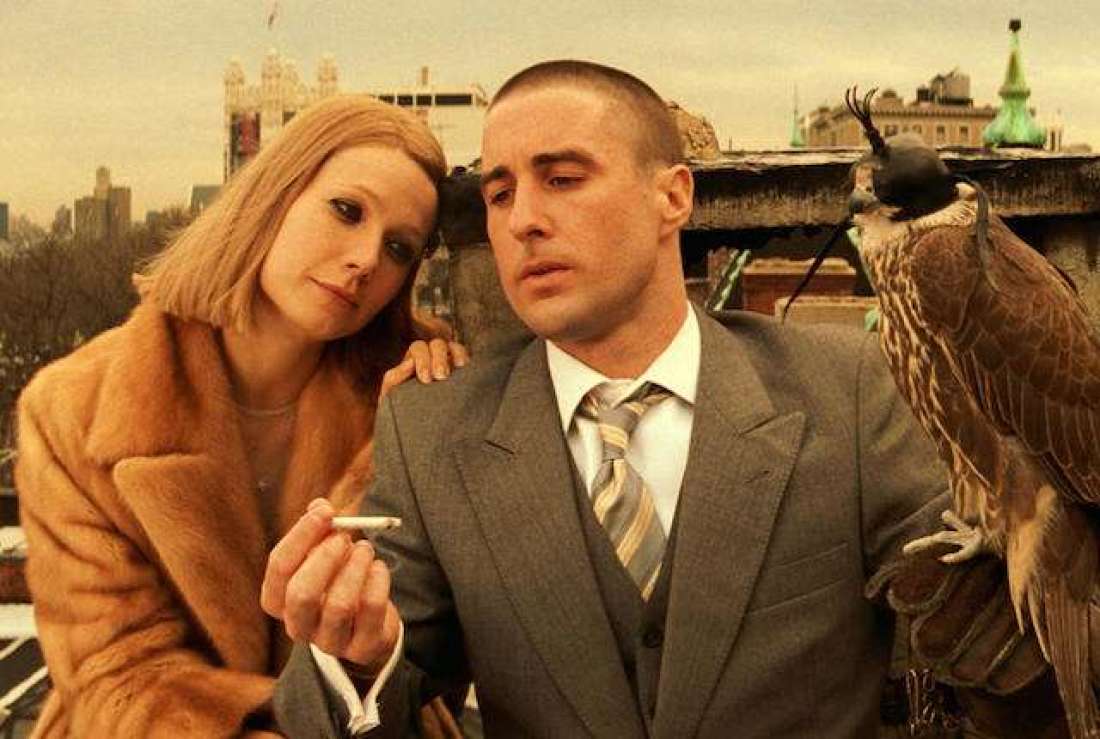 Here I pointed out some aspects of the narrative and the mise-en-scene of the film. Now we continue with analyzing the cinematography, editing, sound techniques and the genre.

When the cinematography of The Royal Tenenbaums is analyzed in terms of camera usage, there are certain scenes with handheld camera, zooms, tracking shots. The handheld camera gives the sense that the audience is more in the action rather than an observer; the zooms give the impression as if the audience is focusing on the item with their own eyes; and tracking shots let the characters remain at the centre of the frame to keep the symmetry and balance.

Handheld camera in films usually give energy to the narrative, and here is significant in two scenes with Chas. The first one is where we are introduced to him and his children with the fire drill where the handheld camera gives the impression of panic, chaos and fast action. At the very moment that we are introduced to Chas, it is certain that the character will neither be a tranquil nor a passive one.

The second scene is where Chas chases Eli after he almost drove over the children. Here the camera technique invites us to get into the chasing and internalise Chas’ anger towards Eli. A musical tone with drums and bells accompany the scene. The chasing begins in front of the door, continues indoors between stairs and ends as Chas throws him over the brick wall. The camera is never stable during the scene and it finalises when Chas accepts that he doesn’t have a stable mind and that he needs help.

At the scene where Royal comes to the fitness park to meet Uzi and Ari, eye-line matching is used together with zoom in. Initially the children are shot behind the wire nets and the camera zooms into Royal when he sees the children. With eye-line matching, the second zoom is into Ari when he sees Royal. The camera tilts down to show Uzi’s reaction and tilts up again to show that Ari is coming down. The camera tracks Ari as he slides down and the camera zooms out as they approach. The boys are shot from high angle from Royal’s perspective and Royal is shot with low angle from the boys’ point of view with over-the-shoulder shot where in this case is “over-the-curly-heads” shot.

The traditional use of high and low angles which indicate powerlessness and powerfulness respectively don’t apply in this film. Anderson mainly chose to use the camera from the point of view of the characters, thus high and low angles exist when the characters are at different levels. It was mentioned above that the technique was used at the scene where Royal meets his grandchildren. Another example would be when Royal and Margot had a conversation on how Margot was mistreating Raleigh. High and low angle shots are used hand in hand with eye-line matching and creates a point of view shot.

There are frequent use of point of view shots in the film, but there is breaking of the fourth wall when the voice-over tells about the various men who wanted to marry Ethel after she broke up with Royal. Usually breaking of the fourth wall has a disturbing effect on the audience, but those shots are not that disturbing in this film because they create the image from Ethel’s perspective. The characters look directly into the camera as they are introduced.

There are multiple uses of freeze-frame, when giving extra background information on the characters, such as when telling the audience about Raleigh St. Clair’s previous work or the cover of Ethel’s book. The technique is also used with indicating chapter breaks as in a non-diegetic novel imagery, at the beginning of every sequence.

There is a three-and-a-half minute-long long take where all characters except Margot are shown at the aftermath of Eli’s car crash. Chas and Royal’s brief but sentimental conversation occurs at the end of the scene. Without any invisible cuts, the director notes that it was taken eighteen times. The temporal continuity is provided through the lack of any cuts. The scene can be thought like a large painting in which every character is pictured doing something else. The camera conveys between them, approaches to the characters, tracks them as they walk away and reveals us, the audience, all conversations in detail.

Another observable camera technique in the film is that the director avoids using shot-reverse shot and instead, he puts the characters into a single frame during their conversations. When he doesn’t fit them in one frame, he uses pan axis movement of camera instead of a cut to capture the two; as he did in the scene where Eli confronts Margot about being in love with Richie. This pattern makes shot-reverse shots distinctive when used as they somehow give the impression of two opposing sides. Two examples would be that the scenes during Royal and Margot’s restaurant scene where he wants to make up for his mistakes and Royal and Henry’s conversation where he accuses Henry of stealing his woman.

Different kinds of camera techniques are used together with various editing styles to add more than the narrative to the story. Slow motion is utilised two times in the film; the first is when Margot gets off the bus to greet Richie and the second is when the family leaves the graveyard after the funeral, which is the last scene of the film.

The former scene has a soft but joyful music at the background and time is expanded through slow motion. The technique is eye-line matching and it captures how Margot is perceived through Richie’s point of view, approaching gracefully in slow motion as if nothing changed in the past years. The latter use of slow motion creates a dramatic ambience as the whole family is gathered once more but this time for Royal’s funeral. The technique makes it possible to observe every character’s mood and reaction to the loss and the scene, and the film, ends as Pagoda closes the fence that writes “Tenenbaum”.

In terms of sound analysis, one can say that there is not much non-diegetic sound effects used throughout the film. In some scenes, there are parallel musical soundtracks that accompany the mood of the scene. A distinctive example for a non-diegetic sound effect would be the tense music that plays for only a couple of seconds and immediately stop with the next shot, when Henry was climbing up the stairs after finding out that Royal didn’t have cancer. A parallel use of music is present when Royal and his grandchildren break the rules, or the rock music during the flashbacks when Raleigh and Richie are shown Margot’s document of information and previous love affairs. The music suddenly stops when the flashbacks are over.

Other than the parallel use of music in certain scenes, the voice over is one of the non-diegetic sounds that intervenes the storyline. At the scene where Royal’s lie is revealed and he is asked to leave the house, he says that he had the best six days of his life. In order to make sure that the audience believes in his honesty, the voice over intervenes to add “Immediately after making this statement, Royal realised that it was true.” The voice over intervenes one more time at the very end of the film, stating how and where Royal died and reveals his will. The voice fills the silence as nobody spoke at the funeral.

Can we talk about genre with auteurs? Even though it is titled as “comedy, drama” there are a lot more to expect visually when it is a Wes Anderson movie. The comedy elements are unique and the drama is never as usual. When considered that the genres are defined in order to help the audience with making decisions by knowing what to expect, auteur films might offer more or sometimes less than what is expected of a film with the same genre. For instance, Blue Jasmine by Woody Allen is also labeled as “comedy, drama” but one can depict the difference between the two films as both directors have very distinctive and genuine styles of their own. There is also a noticeable cameo of Wes Anderson at Richie’s awful tennis match as he gave voice to one of the commentators.

With all the macro and micro elements used together to create a visual art piece, The Royal Tenenbaums is a powerful film to study on. Aside from the visual film analysis, it should be noted that the film was written as director aimed to put his parent’s divorce on screen, and this adds another aspect that could be worked further on.