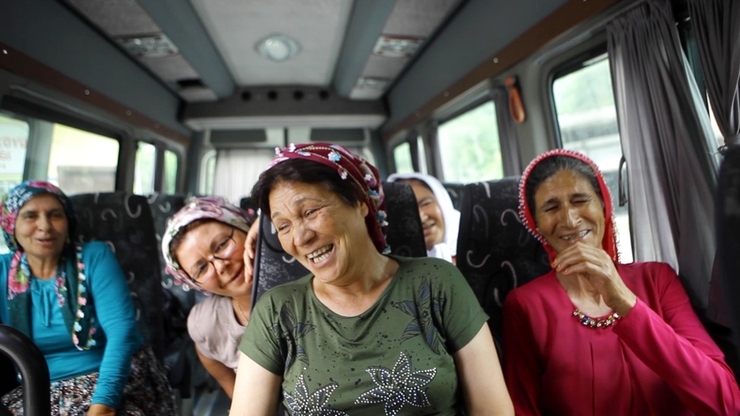 This Sunday was Father’s Day, and the film I chose to write about to honor this day is The Play (Oyun) by Pelin Esmer. The film has nothing to do with a father-daughter relationship. Instead, it is a documentary about the process of putting on a theatre play by nine women in Mersin’s Arslanköy village.

The way these women put the effort to make themselves heard is remarkable. The documentary shows how one creates opportunities regardless of the facilities around them. I thought my father would love the way these women think and act upon, so I chose this is as my not-so-conventional Father’s Day Film. It is also the first time I’m writing about a documentary on my blog, so bear with me.

Before anything, I recommend you watch the TedTalk by Ümmiye Koçak, one of the women leading the play’s production. Noticing how the classical Russian literature resonates with what she experiences in her village, she figures that she can tell their stories as a theatre play to show the wrongdoings of the people in their town.

Therefore, the play “The Outcry of Women” (Kadının Feryadı) is written based on the own life stories of these women. They put their time and effort into the production in addition to their household and field duties. There is a scene that highlights the business ethics behind the project; one of the women comes late to the rehearsal and is lectured on how sickness or death could be a valid excuse, but the guests coming over is not. They are very much devoted: The ones playing the male characters cut their hair short like men, and the one playing the young school girl dyes her hair black.

Like they would in a fiction film, the characters of the documentary are also going through changes in the course of the development of the play. They are initially reluctant to share their honest stories, as those are still too painful to talk about. In time, they realize they need to put themselves out there so that the upcoming generations don’t face the same troubles as them.

The women’s chattering reveals their daily concerns and desires. One of the women says she doesn’t care what she wears or how she looks. To me, it sounded liberating at first, but then they tell how this is attached to feeling noteless. They discuss the gender roles. Most of them claim they would love to be a man instead, and that even though men have arduous duties, they would be happy to undertake them. However, some claim that they wouldn’t have felt that way if they weren’t disparaged as women.

Pelin Esmer holds a Sociology degree from Boğaziçi University. However, she says she didn’t approach these women as a sociologist but instead as a filmmaker. She tells how she wanted the global audience to relate with the women:

“At the moment I am more interested in things that don’t change, the traits that are common in every human being. I try to ask questions rather than underlying the differences and stereotypes with which we operate. I like to see differences as details of life, not something to be scared of. So, I assume that my approach to these women–by not labeling them, by trying to tell their story as a more universal one rather than as an authentic one–helped audiences relate to their own lives.”

The documentary won numerous awards, including one from Tribeca Film Festival in New York. Esmer reunited once more with these women in 2019 to shoot Queen Lear (Kraliçe Lear), which follows the women as they stage Shakespeare’s King Lear in a month-long tour in villages in the Taurus Mountains.

So: Create your opportunity wherever you are. Don’t wait for the right place or the right moment. Start where you are. Dream bigger than you dare, because that’s what the ones to accomplish those dreams do. And happy father’s day!