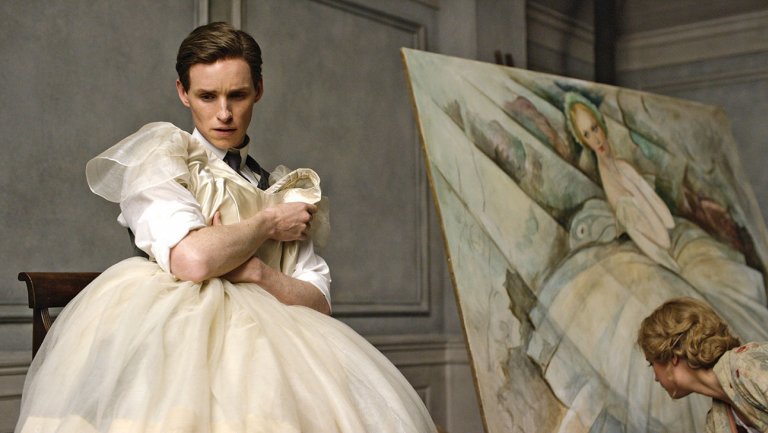 “Seven months before cameras started rolling, we went through different looks, different wigs, different makeup. And at the end, I was like, ‘Let’s just take everything off, I’m just going to photograph you as yourself.’ It was just his own hair, minimal makeup, he was just wearing a slip. And he looked the best of all the pictures — he looked beautiful, he looked feminine. Suddenly, there was a confidence there that I hadn’t seen all day … Suddenly, I saw Lili.” — director Tom Hooper

I remember after seeing The Danish Girl, “How pity,” I thought, “the Academy was a year too early.” In 2014, Eddie Redmayne had received an Oscar for his performance in The Theory of Everything as Stephen Hawking. Knowing they would not give the award to the same actor two years in a row, I remember feeling disappointed that his extraordinary performance in The Danish Girl would not be remembered as an Oscar-winning one. Plus, it was the same year Revenant came out, which I refer to as the movie that was made to finally get Leonardo DiCaprio an Academy Award. So it was just about timing, I guess.

The remarkable detail in his performance is in the subtlety. The story begins as Einar’s wife Gerda asks him to put on stockings and the shoes and pose as the female model, and she puts the dress on him to see how the legs show from underneath the dress. The first time Einar sees his own body as a woman, everything is expressed in the micromimics. His reactions are captured in a close up so there is no need to exaggerate any moves, and what is enough for Redmayne is to simply feel how the character would feel. He has a confused look in his nervous eyes, restless lips, you can tell his heart is racing and breathing is accelerated. The following close up is to his fingers, gently caressing the dress. At that point, those fingers are not Einar’s but Lili’s. He is so caught up in the moment that startles when the friend comes into the room. He has this beautiful hand gesture, exaggeratedly feminine, meaning “whatever” or so, and they laugh together. Then, the friend calls him Lili; unknowingly accurate.

It is worthwhile to note that most of the emotion regarding his performance is conveyed through very minimal acting; like a simple scattered breathing. When Lili puts on an eyeliner for the first time, notice how Redmayne’s mouth is slightly open and his tongue touches his upper teeth. This is clearly a detail which he learned through watching how women put on their make up; because it happens very naturally and unknowingly. Redmayne includes this small detail into his acting  in order to highlight that Einar actually feels as a woman and is only given the opportunity to express now.

Gerda teaches him how to use hand gestures as a woman and how to walk like a woman. Later on, Einar mimics the gestures of the women he sees on the streets, in the market and so. This way the actor somehow hints how he familiarized himself with the role. In the first scene we see a fully dressed and dolled up Lili, the tension is visible. The first thing Lili Elbe says on screen is “Am I pretty enough?”

Later on at the party, there is the first time she experiences the male gaze. Priceless! Lili feels both honored and nervous and Redmayne expresses it lucidly through averting the gaze but cannot holding back from glancing again. Throughout the party and during her first encounter with an interested man, her head is bowed almost all the time.

Redmayne reports that he didn’t do “Method Acting,” although his wife should be consulted for a more accurate answer. What he did was mainly research for three years. He spent time with the transgender community listening to their stories and he read books on transgender biographies, including Lili Elbe’s. He reports that he found the character of Lili before figuring Einar; which helped him to work his way back to how she would live as Einar. In his interview with Daily Mail UK, Redmayne tells that he has been “observing the minutiae of feminine physicality,” and he worked with the movement director Alexandra Reynolds to choreograph his gestures as Lili. The same movement director also couched him for the role of Steven Hawking in The Theory of Everything.

After such an unforgettable performance, one cannot easily think of another actor who would ably accomplish what Redmayne did. Jared Leto obviously comes to mind after his brilliant performance as a transgender woman in Dallas Buyers Club. I could also imagine Joseph Gordon-Levitt for the role because his gentle facial expressions speak way more than words. The Danish Girl was highly criticized due to the fact that a transgender actor was not considered for the role. If it would be the case, then the actress’ performance would convey a recreation of her feelings based upon her own experience as a woman trapped in a man’s body. However, if you keep in mind that Lily Elbe’s story took place in 1920s, and she didn’t go under any hormonal treatment, it could be meaningful  in that sense to cast a cisgender man. The director replies to this issue by telling he wanted to work with Redmayne as he knew they collaborate successfully and was also interested in discovering Redmayne’s own gender fluidity.