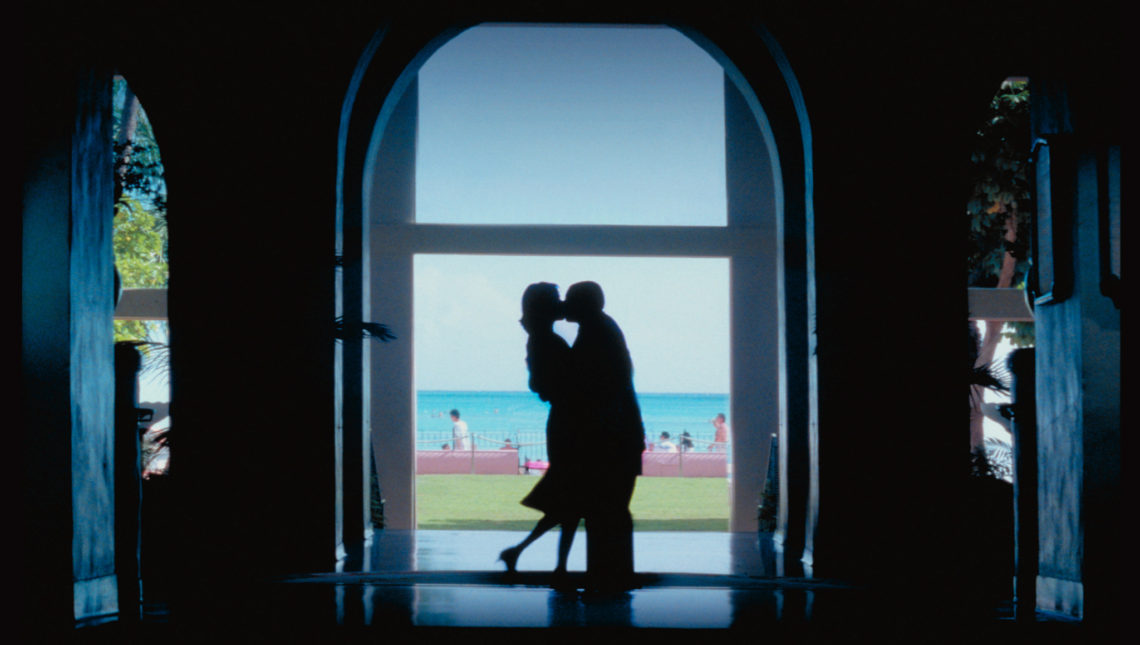 In a surreal moment, a car blows out a tire and drifts along the road before a van pulls aside to drop a harmonium on the sidewalk. As surreal as this, Barry Egan’s (Adam Sandler) entrapped, isolated and dull life turns around as he falls in love with Lena Leonard (Emily Watson).

Punch-Drunk Love, often referred to as “the Adam Sandler movie for people who don’t like Adam Sandler movies,” is deeply layered in many aspects. The film is rich in symbolism, is carefully framed artistically, and is aurally memorable. The director Paul Thomas Anderson worked with the composer Jon Brion prior to shooting to ensure effective sound score, which leads the music to be felt almost as another character.

Anderson enriches cinematic narrative with visual expression using bright colors and the abstract artwork by Jeremy Blake to highlight emotions. In addition to the artwork, the flow is blended in some scenes such as the one in supermarket where the products on the shelves work for the same purpose. The selection of colors and costumes work brilliantly with character development and emotional shifts.

We are introduced to Barry in a blue suit. Even though his family and colleagues are surprised to see him in such outfit, it becomes the character’s signifying costume as we don’t see him in any other one except for one scene. Remember that the color blue in movies stands for the incapable knowledge and the disability to act. Barry is introduced as a passive character. Lena, on the other hand, wears either red (the color of love, passion, opportunity) or purple (the color of magic and miracles). She brings a pure romantic fantasy into his life.

Together with the use of colors, framing also adds to the narrative. Before meeting Lena, Barry had a tumultuous life which is made visible through unbalanced framing. In most of these scenes, Barry is at the one side of the frame, leaving out lots of negative space. But with Lena, Barry has found peace and balance in his life. So even when Lena is not around, if you think of the golf scene for example, the framing displays a great harmony. In Barry’s words; he now has a love in his life, which makes him stronger than anyone.

In Hawaii, where his change begins, notice how the framing and composition of the scenes contrast Barry’s everyday work and home environment. In contrast to the opening scene where Barry speaks on the phone in the isolated and grey office where he feels entrapped and lonely, in Hawaii, he calls Lena from a payphone on the street full of people during a colorful carnival. He initiates the change through relocation and creates a possibility.

Speaking of relocation, when the two leave the restaurant, notice that there is a truck passing by with the slogan “Relocation at it’s best!” This detail reminded me of Tangerine (2015) where some signs and ads on the streets or on the bus were used somewhat as inter-titles within the film to foreshadow the upcoming scenes. Details as such makes me feel as if the director is speaking directly to me, which I pretty much enjoy.

Continuing with the symbolism in Punch-Drunk Love, the most open symbol is the harmonium which stands for Lena and Barry’s love. At the initial scenes where the they meet and talk for the first times, notice that the harmonium is framed between the two in order to hint the relationship. The first time he plays the harmonium the light source is at the back, leaving his face in the dark. Like love, it arrives out of nowhere, and Barry takes it in his life without knowing what it actually is. His life is illuminated as he learns from Lena that it is a harmonium and learns to play it throughout the film. The film beautifully ends as Barry plays the harmonium in-sync with the score, and with Lena holding him to say: “So here we go.”

As a lonely man, the phone is displayed as Barry’s connection to the outside world. It often comes up as a troubling element; his sisters torture him by keep calling on the office phone, and he gets swindled over the phone. At the same time, it can be interpreted as his escape from loneliness as he calls the hotline for sexual needs, and asks for a phone the moment he arrives in Hawaii. Also, when he calls the bank to cancel his credit card, he asks the woman her name and says it was nice to meet her. Finally, we see a phone in his hand while confronting Dean in Utah, and leaves it behind before walking out, as a way of redeeming himself. The song at the background is “Lonely Blue Boy,” for Barry is not one anymore.

Aside from being a love story as the title suggests, there is a fluent expression of Barry’s character development. At the beginning of the film, he had trouble owning the situation he was in. In Hawaii, he says: “It really looks like Hawaii here”. He makes his date laugh delivering the morning DJ’s joke instead of using his own words. And he simply reveals the reason behind all these: “I dont like myself sometimes. Can you help me?” As he is open to receive help, it all gets better. Right there we have a message to take.