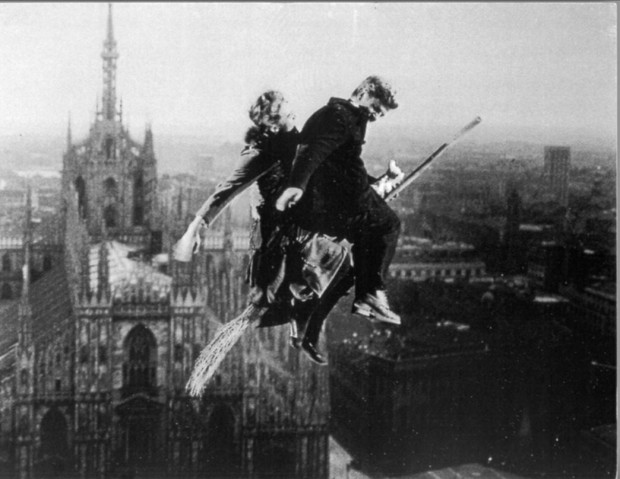 This is what the Italians want, or at least the government. Note that the most joyful films were shot during the most depressing, the most struggling times. The government knew that in order the people not to rebel against policies, they needed to laugh somehow. Not only the government though, the people already had post-wartime struggles as unemployment and poverty; and they did not want to see people suffering on the big screen, as well. The situation is not very different with the Turks, if you think of films such as Neşeli Günler and Gülen Gözler. The message is simple: You might have just lost your job or failed to bring home bread; but at the end of the day, you can gather around a big table with your family and smile.

Miracle in Milan (Miracolo a Milano) is a magic realist film directed by Vittorio De Sica, based on the novel by Cesare Zavattini. The main character is a vivacious orphan, Totò (Francesco Golisano), who tries to make the best out of his life by overcoming any struggle open heartedly.

The setting corresponds to a time when the socioeconomic circumstances could not yet find a balance in a country after war. There seems to be a huge gap between the wealthy and the poor, with the lack of a middle class. The film provides a gap between their manners, too. At the beginning of the film, Toto seemed weird when he said hello to the businessman on the street, but the poor man he runs into is as much giving as he is. He has nothing, yet shares everything. Where he lives is barely a tent, and they follow the sun for heat.

The issue is so delicate that there is no in between. Either the film will immerse us in this awful tragedy to make us cry, or it will make fun out of it. It would not be ethical to search for something in between.

Totò borns to this world miraculously, almost like a messiah. He is very optimistic, good hearted, and giving. He can be happy with the smallest thing. He lives with such joy that it seems as if he doesn’t belong to our world. Notice that there isn’t a woeful atmosphere even when he is sent to an orphanage after the lady who took care of him dies. It is simply the way life is.

The train stands for development, advancement. It means to cross to another world where there is hope, as it takes you to somewhere that has job opportunity. When the folks decide to settle, they build themselves a city that even has a piazza and a statue. They do every little thing in cooperation and help each other in every step. On the other hand, the rich firm is large, of marble and concrete. Even their statue is big and masculine. All they seem to care about is flamboyance, and to purchase and possess. In their world, our folks are insignificant.

The miracle arrives when most needed. What the Italian people needed was an economic miracle; here in the film, it is a white dove. In contrast to the rich who waive nothing, Toto shares his miracle with everybody, and his first demand is not gold or money, it is as naive as ‘food’.

Unfortunately, when they arrive at the city, they see they don’t belong there as well. They eventually have to leave it by flying brooms. They are simply out of the equation because there is nowhere they can dwell. They do not have a place in this world. So instead of dying, they disappear in the sky.

From a romantic point of view, this film has a happy ending as in the end, nobody could actually harm them. But it is heartbreaking to hear out what it tells about where the socioeconomic system takes us to.