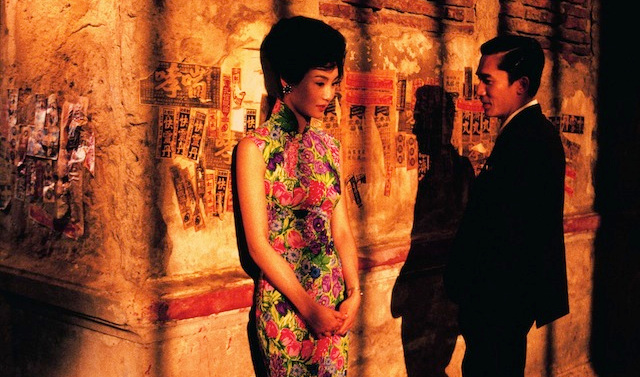 In an earlier post, I mentioned how most Wong Kar-Wai films are considered to be must-see movies among cinephiles. Recently, a filmmaker neighbor told me that this was her favorite film ever, so let’s talk about In the Mood for Love. It is a nice coincidence that today is Maggie Cheung’s birthday!

The story takes place in Hong Kong in 1962. Chow Mo-wan (Tony Leung Chiu-wai) and Su Li-zhen (Maggie Cheung Man-yuk) move into adjacent apartments the same day. There is a chemistry between them, yet they keep their conversations short and formal as both are married. The two start to feel closer around what they discover about their spouses.

To me, the film stands out with framing and camera movements. When Chow and Li-zhen are speaking on the doorway, we see only one of them in the frame, suggesting their emotional distance. Similarly, we barely see their spouses, which highlights their absence in these characters’ lives. The director opens a new conversation around whatever we don’t see framed because they become as important as the ones filling the screen.

Wong makes use of walls, interior spaces, and narrow stairs to depict the characters’ imprisonment. At one point, Li-zhen is literally stuck in Chow’s room. They are trapped in these emotions and the director ensures that the viewer clearly sees it, too. Moreover, Christopher Doyle’s abstract cinematography is noted to have a significant stylistic influence on the films later produced.

“That era has passed. Nothing that belonged to it exists anymore.”

How heartbreaking! The two have an ambiguous relationship which prevents them from being brave, or “like them,” as Li-zhen adds bitterly of their spouses. Do they wait for the other to be brave? Are they in love? Or just in the mood for love? “Quizas, quizas, quizas,” says Nat King Cole (“Perhaps, perhaps, perhaps”). In addition to the song, the ticking of high heels and dripping raindrops make the film as delightful to hear as is to see.

The title so very poetic, don’t you think? I was curious about its original title, so I asked my Chinese friend if it was a direct translation. She said what the film is originally called would be translated as “Age of Blossom.” I get the idea, but I still think the English name contributes to the film’s romanticism.

For the curious viewer: Chow’s new apartment is number 2046, hinting at the director’s next film. It is considered as a loose sequel of this one and Days of Being Wild (1990). I haven’t seen this futuristic romantic drama yet.

There is a childish, innocent tone in Wong’s films, making you believe this is the purest love possible. I also like that the director points to what hasn’t been told within the story. Even in the end, Chow whispers his soul’s secrets into a stone hollow before covering it with dirt to keep them unheard. There is much said, but much more left unsaid. Just like life.